The Day I Got My Label 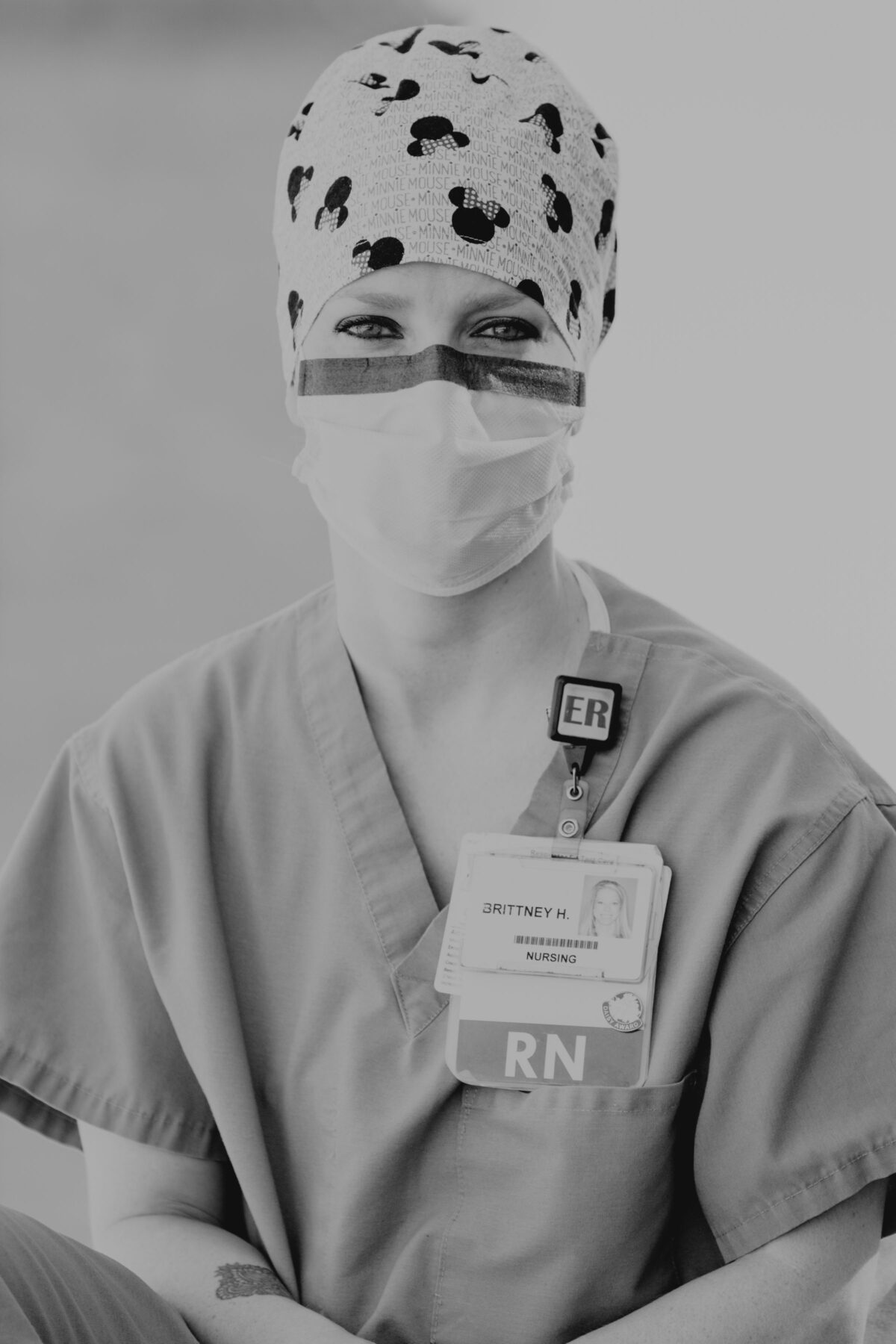 After seven months of floating around the hospital and working the frontline, COVID finally got me. I had awful body aches, excruciating headaches, and chills for over a week. On day ten, it was like a light switch—I felt like my old self again, which meant: it was time to go back to work. I spent the next two nights working in the ICU.

I had one night off then I was to work on the post-op floor. I decided to take a true “road test” and see what my pulse oximeter said once I walked from my car to the third floor. By the time I made it to the elevator, I was trying to slow my breathing. The more I tried, the harder it was to breathe. The pressure in my chest just kept building. I looked down at my pulse oximeter and saw that my heart rate was 144 bpm. I let my boss know what was going on, then I went and sat down for a bit. It felt like my heart was going to come straight out of my chest. It was beating so fast it was making me anxious, which in turn made me short of breath. But after about five minutes, I was able to calm myself down. I went about my shift until it started back up again a couple of hours later, completely unprovoked.

Our ICU Pulmonologist sent me home from work. He called in some medications and told me what vitamins to pick up. The next thing I know, it was 0100 hours and I was in the parking lot of CVS alone, in my car, FREAKING OUT. I felt it starting again, except now I was alone, so the tears were flowing. I had no idea what my problem was, but I was panicking! I texted my dad. He was ready to drive almost an hour to come get me and take me home, but I was too proud to accept help. He talked me down and I was able to get what I needed and be on my way. I was beyond overwhelmed. I am a thirty-one-year-old, healthy nurse. I “did my time.” I could not understand why I was struggling THIS BAD this LATE into the COVID timeline.

The next day, I was making dinner when my husband returned home with my stepson and stepdaughter, whom we hadn’t seen since before we’d both had COVID. I was browning some hamburger, the front door opened, and I heard feet running through the house, the kids playing with one another in excitement. I froze. It was like my whole body went into shock. I remember standing there, wanting to go to the garage to cry because the stimulation of the kids in the house—a regular occurrence in my life before—caused my anxiety to spike.

I still did not understand why this had such a HUGE impact on me. Then I realized: I had no idea what recovery from COVID truly involved.

As a frontliner, COVID to me was watching all these super sick patients arrive, sucking air, and begging for our help while stating, “I can’t breathe.” A lot of the patients in ICU did not make it. No matter what we tried, it was never enough. The “lucky” ones… I did not think about the journey they would experience after the hospital as they continued to recover. In the hospital, we’d help them get out of the woods and then send them on their way. I did not realize the traumatizing psychological and emotional toll COVID takes after you’re exposed to it. Being a nurse, I always thought anxiety and panic were due to the patients being short of breath. After having COVID, I truly believe the anxiety came before the shortness of breath. They are not freaking out because they cannot breathe, they are freaking out because they are experiencing anxiety like they never have before.

The patients were confused, trying to crawl out of bed, pull their oxygen out, and mess with their IV’s. Some had to be paralyzed while on the ventilator because their body was still fighting the vent even though they were sedated.

Or maybe they weren’t as confused as we thought. Maybe they were acting this way because they could sense doom, or they wanted to die with their family present, or they were absolutely terrified of death. Whatever the case may be, as hospital workers, we had to see some things that no one should ever have to see. We had to find ways to comfort patients without making promises we could not keep, such as “you’re going to be okay.” We had to answer phones to update families that continuously called, all while trying to keep those patients in the bed, keep their oxygen on, and their critical drips infusing.

The day after I was sent home from work, I made an appointment with my primary care provider to let her know I was NOT okay. My heart rate would go through the roof anytime I would exert the smallest amount of energy. I was struggling to even function. I let her in on my personal COVID timeline and explained how just walking from the waiting room back to the examining room, my heart rate was 128.

She stated, “I think you have PTSD. One day, when you are ready, I really hope you choose to share your story.”

I looked at her dumbfounded, but I was so desperate to get my heart to stop racing that I was willing to hear her out. She suggested I walk straight down the hall to my psychologist’s office and make an appointment as soon as possible. I started zoloft and ativan and I made my appointment.

A couple of days later, I was sitting in my psychologist’s office. He also thought I had PTSD, and that having COVID had triggered it and pushed me over the edge. I still wasn’t fully convinced.

His response: “You were probably dreaming about things at work.”

I couldn’t argue with that. After a couple of weeks, I was released to go back to work on restrictions.

One day, a rapid response was called on our Rehab floor. My boss popped in on her way to it and asked if I wanted to come. I went, stood back, and took it all in, giving my advice here and there but trying to obey the rules my psychologist set for me. I was cool as a cucumber. I then suggested blood cultures, and my boss and I collected the specimens while the other nurses got other things going. I didn’t second guess it. It was like riding a bike. I laid out all my supplies, I was feeling good. I inserted the needle, and my palms instantly started sweating. I could feel my hands shaking, my knees trembling, and my heart felt like it was going to pound out of my chest. THAT was the moment I realized I really did have PTSD. There I was, this nurse who has been working in an ICU or ER environment for the last five years, and I could not perform the most basic nursing intervention without being triggered.

I kept this all to myself during the procedure. Once we were all done, we took the patient to the appropriate floor and my boss asked me, “how are you doing?” At that exact moment, the anxiety had passed, so I was able to say, “feeling pretty good, just a little short of breath from moving this patient. It’s been months since I’ve done any kind of physical activity.” I wasn’t lying, she just didn’t ask the question at the right time.

I told my therapist about what happened. He said, “I thought I told you not to put yourself in those situations.”

I replied, “that floor is our responsibility. At the end of the day, it is a person’s life. My boss has already accommodated me so much. I was not going to tell her, no. Not in that moment. You know what Dr. V? Sometimes you have to touch the stove to make sure it is still hot!”

He kind of chuckled and then educated me. If a person with PTSD goes back to the triggers too early, it can take twice as long to recover than if they had fully committed to the treatment program the first time around.

Still, I do not regret my decision that day. If I had not stepped in to help, I’m not sure I would have truly believed my PTSD diagnosis. But once I felt my physiological response, there was no denying it.

This is the most I’ve ever opened up about my current situation. After three months, I am finally able to sit down and write about it without crying and without my heart rate spiking. Accepting the PTSD label has been a hard pill to swallow. I have been advised never to return to work as a floor nurse in such an intense environment, which has absolutely crushed my soul. There is no better feeling than being able to bring your patient back to their family during such a difficult time. My job was an honor. It was an honor to bring back the crashing patient. It was an honor to sit with patients as they passed away with dignity and in peace. It was hard to be told not to go back to that.

I won’t lie, completely walking away did cross my mind. Then I remembered why I went into nursing. I wanted to be the nurse that made a difference in the patient’s hospital stay. I was never allowed to quit anything when I was growing up, so I refused to allow myself to quit now. I decided to be honest with my boss about my fear of returning to the floor. I have had to completely let my guard down in order to allow myself to heal. No, I may not be living my dream job anymore, but maybe it was time for my dream to change. Maybe it’s now my calling to speak up and let the world know: It is OKAY to NOT be OKAY.

Ever since I started letting people in on the reality of COVID and PTSD, I have had many people reach out and thank me because they thought they were the only ones. This trauma is something we’re all experiencing. We’re just too proud to speak up, or too selfless to take the time to take care of ourselves. Well, I am here to tell you: if you do not do it for yourself, do it for those who believe in and support you. You are not in this alone and it’s okay to cry.

I am returning to work in about a week, after almost three and a half months off the floor, and I have so many mixed emotions. I will now be learning the ortho and rehab world. I am ready for things to return to normal. I have been trying to keep busy so that I don’t get in my head. Truth is, I think the closer I get to returning, the more I’ve been panicking. This past week, I have had a harder time sleeping and I even woke up one morning with my heart racing. I am going to continue to try and get back in the ring. Mama didn’t raise a quitter. So, send me some prayers and positive vibes next week!

Take care of yourself. Stand by your beliefs. And remember, it is OKAY to NOT be OKAY!

3 thoughts on “The Day I Got My Label”